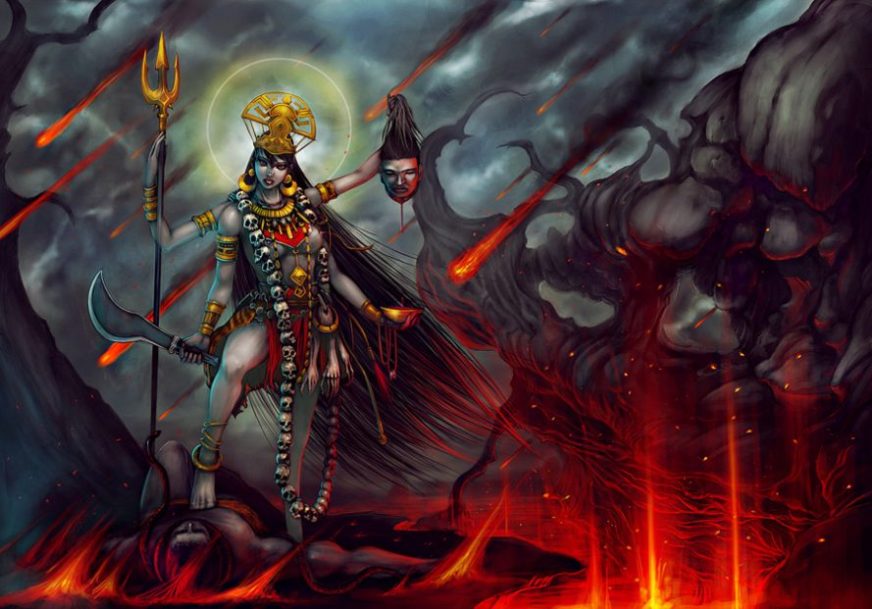 As discussed, the festival of Deepavali or Tihar has many different historical events and stories co-relating to this beautiful festival. The return of Rama to Ayodhya is the one, but there are three more such pre-historical events that jibe to the killing of Narakashura.

The one account mentioned in Kalika Purana, states that Narakasura was killed by Maa Kali, so Naraka Chaturdashi, on the first day of Deepavali is also called ‘Kali Chaudas’ in North-eastern parts of India. The 2nd narration is from Srimad Bhagavatam itself, where it narrates how Krishna killed Narakashura. The most fascinating one is the third one where it is believed that it was not Krishna but his wife who did the honours of killing the Demon.

In this post, we will try to look at each of the accounts and the narrations available for us.

This event is narrated in the Kalika Purana, which was composed in Assam in around 10th century AD. It is stated that trapped by his lust, the Demon Narakashura desired to marry the Devi Kamakhya, also known as Maa Kali. Narakashura then proposed to MaaKamakhya, who impishly put a condition before him that she would marry him if he was able to build stairs from the bottom of the Nilachal Hill to the temple in a single night before the cock crowed. Narakashura took it as a challenge and tried all with his might to do this huge task. When He had almost accomplished the job, Kamakhya Devi then smothered a cock which crowed untimely, giving the impression of dawn to Narakashura. Duped by the trick Naraka thought that it was a fruitless job and left it halfway through. Later he chased the cock and killed it. Now the place is known as Kukurakata situated in the district of Darrang, of Assam. The incomplete staircase is known as Mekhelauja Path.

The other version of the event is the well-known one to all. Narakashura was the son of the mother earth. As Narakashura became very evil and powerful, he conquered a part of heavenly Mount Meru. The King of the heaven Indra, therefore, sought help from Lord Krishna, to get rid of Narakashura.

Krishna immediately proceeded, upon reaching he broke all the line of defences and then killed all of the demon’s associates instantly. When Narakashura saw that all his soldiers, commanders and fighters, had been killed on the battlefield, he was furious. As he engaged himself in the fight with Krishna, Lord Krishna then beheaded Narakashura with his divine Sudarshan Chakra, so quick that Narakashura couldn’t even throw his trident toward Krishna.

In the palace of Narakashura, Lord Krishna saw 16,100 young princesses, who had been kidnapped and held captive there. But they refused to return to their respective houses, as they feared criticism, for they were kidnapped by a demon king and were kept by him. Lord Krishna then expanded Himself in 16,100 forms and simultaneously wedded them all, providing them with the recognition they deserved. Thus, Lord Krishna had 16108 wives, since he already had 8 wives as of then.

The most fascinating account on the Killing of Narakashura is the one where it is believed that it was Krishna’s wife, Satyabhama who did the honours of killing the Demon Narakashura. The tale goes as the Earth or Bhudevi, mother of Narakashura, had obtained a boon from Lord Vishnu that her son would die only when she wishes for it. Another tale suggests the same thing with a different angle that Narakashura had obtained a boon that no Men could ever kill him.

During the battle between Krishna and Narkasura, as the amazing facts of the boon were known to Krishna he creates an illusory scene, where he faints and falls on the ground from the onslaught of Narakashura. This enraged Sathyabhama, Krishna’s wife, who then fired arrows at Narakasura frantically and finally killed him.