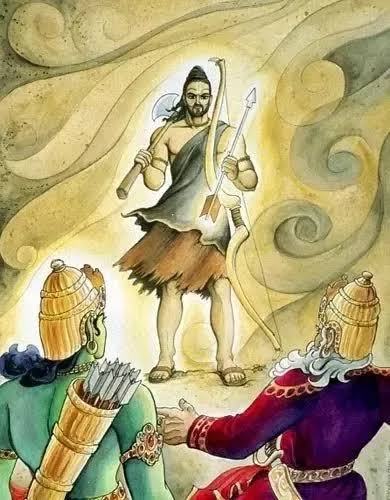 Parshuram was famous for his prowess as a fighter. In former ages he had single-handedly overcome the world’s warriors, annihilating them by the millions. The sage had become enraged when his father was killed by warrior kings, and he wreaked an awful vengeance. Parshuram then scoured the globe massacring the entire warrior class.

Rama had a quite rough phase as he first fought Demons thereby helping the sage Vishvamitra complete his special austerities. Rama then redeemed Ahalya and then he was asked to break the Bow of Shiva for winning the Swayambar to marry the princess, Sita. He did it all. Rama along with his newlywed wife along with his father, brothers and co. were finally travelling back to Ayodhya.

But, to their surprise, on the way back, they saw Parshuram standing before them holding a battle-axe in one hand and the other a fierce arrow which resembled a streak of lightning. Parshuram, who was as tall as two men and with a great bow upon his shoulder he looked like the ‘Death incarnate.’ Appearing as irresistible as the fire of universal destruction, he blocked the path like an impassable mountain.

The sages in Dasharatha party quickly gathered together. They took water to wash Parshuram feet and hands and offered him gentle words of welcome.

The Fury of Parshuram

Accepting the honour offered by the sages, Parshuram looked at Rama and said in a grave voice,

“O Rama, I have heard of your strength. By breaking Shiva’s bow you have performed an incredible feat. How can I, who has formed a great enmity with all warriors, tolerate hearing of such prowess existing in a King? I have with me another sacred bow, but that of Vishnu’s. Let us see your power now.”

Parshuram then asked Rama to fit this celestial arrow on his bow and simply draw it to its full length and if Rama could accomplish the task, then Parshuram shall challenge Rama to single combat. Parshuram continues, “When you stand on the battlefield and are swept away by the force of my weapons, you shall earn undying fame.”

Dasharatha threw up his hands in horror. Knowing well of Parshuram power, he feared for Rama’s life. He with joined palms begged Parshuram to spare Rama. Paying no heed at all to the king, Parshuram continued to speak only to Rama: “Both the bow broken by you and this one here were constructed by the architect of the gods, Vishwakarma. The one you sundered formerly belonged to Shiva. However, this one here was Vishnu’s property. It is thus more powerful than the one you broke.”

Parshuram took the bow from his shoulder. With furrowed brows, he gazed at Rama with inflamed eyes, not immediately recognizing the prince’s divine identity. “The bow has been passed down from Vishnu to my ancestors and finally to me. I now offer it to You, O Rama. Considering Your sacred duty as a warrior to always accept a challenge, exhibit now the strength of your arms!”

Parshuram held out the enormous bow. Rama, smiling slightly, stepped forward. “I have heard of your tremendous feat in fighting and killing all the world’s warriors twenty-one times. You have fully avenged your father with this worthy action.”

Even as a child Rama had been told the story of Parshuram. The many kings killed by that sage had become debauched, and it was by divine arrangement that they had been annihilated. As a sage Parshuram had performed much asceticism and had finally been personally empowered by Vishnu himself. By dint of Vishnu’s desire and power, Parshuram had been able to exterminate the warrior class. Now Vishnu, appearing as Rama, again stood before Parshuram. Rama continued to speak: “You are a Brahmin sage and are therefore worthy of my worship. However, since you despise me, seeing me belong to the warrior class, I shall now display to you my prowess.”

Rama seized the bow along with the blazing arrow from Parshuram hand. He strung the bow in an instant and drew the arrow back to his ear. Looking furiously at Parshuram, He asked,

“Where shall I discharge this deadly shaft, O sage? You are my superior, thus I presume not to aim it at you.”

Hosts of gods had assembled in the sky. Seeing the celestial bow drawn in anger by Rama, and fearing that He may destroy the heavens, they cried out, “Vishnu! Save us, save us!”

Rama, standing with the bow, blazed as brilliant as the sun and Parshuram fell back in astonishment. He felt his power completely eclipsed by Rama. Suddenly realizing Rama’s identity, Parshuram spoke in stumbling tones. “You appear invincible and I can understand that you must surely be the imperishable Vishnu himself. I accept defeat but I am not ashamed, as you are indeed the Lord of all the worlds.”

Parshuram recalled how Vishnu had long ago said He would come again to take back the divine energy He had given to the sage. The warrior-sage folded his palms and said,

“O Rama, O all-powerful one, you have already divested me of my power and my pride. Please release this arrow upon my desires for heavenly pleasures and thereby burn them all to ashes. I wish only to serve you. With all my material aspirations destroyed by You, I shall be fit to become your eternal servant. This is my deepest desire.”

Parshuram bowed low before Rama, who then fired the fearful shaft. The sage immediately vanished along with the arrow. Then Varuna, the god of the waters, appeared and Rama gave him the celestial bow to keep on behalf of the gods.

The exchange between Rama and the sage was heard and understood only by Vasistha and a few other spiritually powerful Brahmins. The king and the others present had been wholly confounded by the events that had occurred. They were relieved to see that Rama had somehow assuaged the sage Parshuram. Everything again became calm and the party resumed their journey, soon approaching Ayodhya.

Retirement of Parshuram – rumours or fact

3 thoughts on “The day when Parshuram crossed roads with Rama”