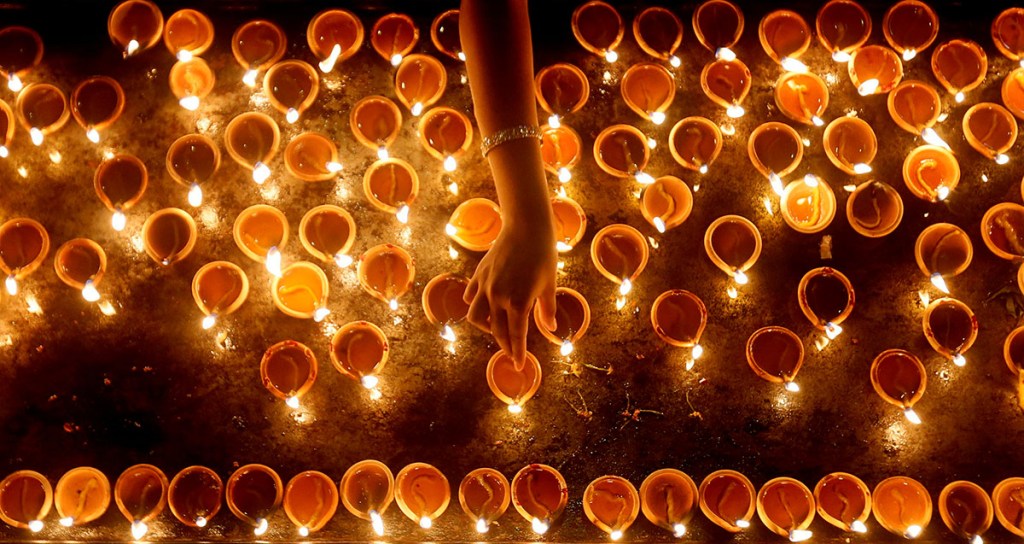 In the festival of Tihar, animals and birds are worshipped, mainly Cows, dogs and crows. People clean their house and adorn it with flowers (mainly marigold and roses), artificial lights and earthen lamps, deepas. The flowers budding of marigold and roses, in the flower gardens, redecorate the entire environment during this festival.

Tihar or Diwali 2019 will be celebrated on 27th October in most parts of India, while a few others will celebrate it on the 29th of October. The festival and its celebrations are of five days long, among which the third day is celebrated as Tihar or Diwali. During all the five days houses, temples and public spaces are first cleaned up, then are beautifully decorated and lit up with artificial lights and earthen lamps (deepas). The adults and children celebrate this festival by lighting up fireworks, as it signifies the way to chase away evil spirits.

Dates of Tihar | Deepavali or Diwali 2019

The 5 Days of Tihar or Diwali

The first day of Tihar or Deepavali is Dhanteras which denotes the arrival of the new financial year for most Indian business class. On this day, Kag Tihar (worshipping of crows) is celebrated as Hindus (mainly Gorkhas’ and Nepali’s) worship crows and feed them. This signifies the thanksgiving to the animal who cleans up the environment by eating away the residuals and wastes.

This year of Diwali 2019 or Tihar falls on October 25 which is the 13th lunar day of Krishna Paksha according to the Hindu calendar month of Karthik. This is the day that most people go out to buy new things like utensils, gold coins, and jewellery.

On the occasion of Dhanteras, Dhanvantari (an incarnation of Lord Vishnu), who is the god of Ayurveda who imparted the wisdom of Ayurveda for the betterment of humanity is worshipped. According to ancient texts, when the Gods and Demons performed the churning of the ocean for the divine nectar of immortality, Dhanvantari appeared carrying a jar of the nectar, on this day of Deepavali.

The second day of Deepavali which is the Choti Diwali is the day of cleansing. People after cleaning their homes, take baths and wear new clothes. On this day people have good times as they throng to the markets to purchase sweets while some prepare it themselves for their guests, friends and family as they wish them good health, success, and prosperity.

On this day of Tihar, Kukur Tihar is celebrated. On this day, dogs are worshipped in the same way recognizing their loyalty and the protection it offers.

On this day the victory of Kali and Krishna over demon Narakashura is also celebrated as Naraka Chaturdashi.

The third day of Diwali or Tihar is called as Badi Diwali or the main Diwali. It falls on the darkest day of the year (Amavasya), the new moon day. It is the official day of the Deepavali for the Hindus. Lakshmi Puja is carried out on this day by those who don’t perform it on the 1st day of Deepavali. On this day, in West Bengal, Odisha and Assam, the Goddess Kali is also worshipped.

The fourth day of Deepavali or Tihar is celebrated as the Goru Puja (worshipping of Oxen) and Gaai Puja (worshipping of Cow). The Ox and Cows are first bathed and then worshipped. Using colourful tikas in the entire body of the OX and Cow are decorated. Then they are adorned with beautiful flower garlands, on which the white Cows or Ox will resemble the holy servant of Mahadev Shiva, Nandi Maharaja. The fireworks are then carried out to cast away the evil in the animals since the animals are the one with the utmost value to the Hindus.

The fifth day of Diwali is the final day of the festival i.e., Bhai Tika or Bhai Dooj, it denotes the love between sisters and brothers. On this day, sisters put a tika, colourful marks on brother’s forehead as they worship their brother for their long life. Sisters’ then put garlands of flowers on their brother’ necks and brothers’ offer them gifts while vowing to protect her, forever.

Significance of Tihar, Diwali or Deepavali

The word Diwali is derived from the Sanskrit word of Deepavali, which means a “row or a string of lights”. Diwali or Deepavali is celebrated on the darkest day of the year, Amavasya. Thus the day also marks the victory of Light over darkness. As different cultures celebrate Deepavali in their own ways and traditions the only thing common is that it is celebrated on the 20th day after Vijaya Dashami.

Tihar is celebrated as a festival of joy. People play Deusi and Bhailo as they dance and sing beautiful songs making a group and then visit houses greeting them and in the end offer their Aashish (heartfelt blessings) to the family members, wishing them prosperity. In return, they get money and are fed with traditional foods like ‘Sel roti’ (circled roti, made of rice crusts). The tradition of playing deusi and bhailo is believed to date back to the pre-historic age. The elders, these days every adult, play cards with their friends or family and amuse themselves with various delightful activities.

The festival of Deepavali or Tihar has many different historical events and stories co-relating to this beautiful festival. Some celebrate this festival because Lord Rama returned to Ayodhya on this day after an exile of 14 years while some other celebrate Deepavali by worshipping Goddess Lakshmi. Some celebrate the victory of Lord Krishna over Narakashura while others celebrate it as the victory of Goddess Kali over a Demon of the same name, that’s a different post, Narakashura. Let’s take a brief look into all of the events circumambulating this auspicious festival of Diwali or Deepavali.

Deepavali is perhaps the most important and ecstatic festival, celebrated by Indians. The festival of Tihar or Diwali will be celebrated on October 27, 2019, in most parts of India, except in the South, since they will celebrate it on 29th of October, the last day of Diwali. On the third day, the people worship Goddess Lakshmi to attain wealth and success. This year the time to carry out Lakshmi Puja is between 06:42 PM to 08:12 pm, on the 27th of October.

This is the main day during the five-day festival and is also known as the day of Goddess Lakshmi as Lakshmi, the Goddess of wealth and prosperity is worshipped on this day. Before commencement of the Puja, it is important to cleanse and purify the space where the Puja is being carried out, as it is believed that Goddess Lakshmi likes cleanliness. Some also observe a Vaibhava Lakshmi fast, for one day as it is believed to be equivalent to 21 such fasts if done on the day of Diwali. Then in the evening, the family gets together and recite prayers together and they offer many offerings of sweets and many, to the Goddess. As the Arati conclude, everyone takes blessings from the Goddess and then indulges themselves in sweets. The fast is now broken. Sweets are the charm of this festival as it is the day to greet friends, family and relatives and exchange gifts and sweets.

Maa Kali is the first of 10 incarnations of Durga, the goddess of protection. Kali Mata was born from Durga’s forehead to save heaven and earth from cruel demons. Illustrated with a fierce face, MaaKali is considered as a more aggressive form of Durga. Also known as Mother of Destruction, MaaKali is the destroyer of evil and false ego.

The tradition of MaaKali Puja started in the 18th century and gained popularity as people since then started to patronize the festival widely across Assam and Bengal. Goddess Kali is worshipped with Tantric rites and mantra in the night of Deepavali and worshippers pray to the clay sculpture in homes or Pandals (public stage). People who follow the tantric rites offer Maa Kali red hibiscus flowers, animal blood in a skull after the sacrifice is carried out, fish and meat. The Kshatriyas mainly carry out the Bali or sacrifice ritual, whereas worshippers of the Brahmanic rituals do not sacrifice any animals and worship Adya Shakti Kali – a form of the Goddess offering sweets, rice, and lentils. The devotees often observe a fast on MaaKali Puja which is observed till all the rituals are completed. On the day of Deepavali, Maa Kali Puja signifies inner and outer illumination with bliss alone.

Rama along with Sita and Lakshman, and with all the monkeys aboard, flew to Ayodhya on the chariot of Ravana, Pushpaka. From a distant Hanuman was sent as a messenger to inform Bharata with the news of Rama’s return. Hearing the news he was overawed by joy. As the news spread, the entire city of Ayodhyaprepared the grand welcome of Rama. The city streets were beautifully decorated with flags and garlands. The crowds roared in joy, and it appeared as if the entire population of Ayodhya had come out, all hoping to get a glimpse of Rama. The thunderous vibration of conches and the roll of drums was tumultuous. As Rama reached, from the balconies of the mansions, women threw handfuls of flower petals and parched rice. The people were overjoyed, the people sang and performed their breath-taking dances. This is still carried out as a ritual as every year on 20th day after Vijaya Dashami people celebrate Deepavali, sing and dance (deusi and bhailo) on the festival of lights, to mark Rama’s return, as the day of Deepavali or Tihar.

Wishing you all a very happy and prosperous Tihar or Diwali 2019, See ya all, till then stay blissed.

Also, do read the post on the various versions of tales related to the Demon Narakashura, which has a significance as Naraka Chaturdashi or Kali Chaudas on the 2nd day of Diwali.